EDUCATION: An Int’l School for Largo 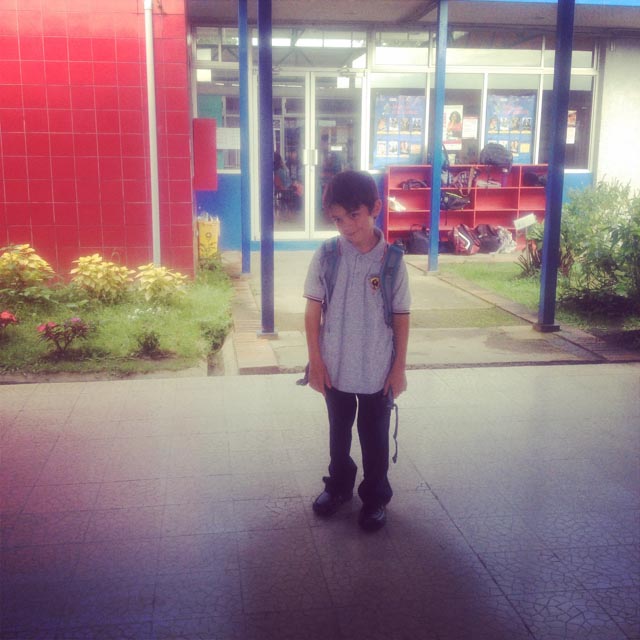 Hola friends. I am sure by now you are wondering what we have done with Largo and his education. He is being educated out in the wild by the parrots and howler monkeys. It is amazing how much he has learned about swinging from the vines and eating banana’s (wink, wink).

If you read this post about Avalon you know that she is being World/Home Schooled in Costa Rica. If you guessed that Largo is on a different path then you are correct! Gold star for everyone. Do I sound like a teacher? I have been practicing for two months now with Avalon. Ha!

Avalon is a fluent French speaker because of her years in an International School in Boston. We believe that Largo should be offered the same opportunity to become fluent in his second language. In order for him to do this it is necessary for Largo to remain in a brick & mortar French school for several more years. The French school will give him the opportunity to develop a greater understanding of the writing/grammar part of the language that we are unable to help him with. After a couple more years we will entertain World/Home Schooling for him as well, if he is interested.

So, where is Largo? He is attending an International School here in Costa Rica. Largo is taught mostly in French with approximately five hours a week in Spanish instruction. Music, art and gym are also taught in Spanish. Not only does he get the French, but he is learning Spanish at the same time. Wait, what about English? Unfortunately he only gets one hour of English a week, but honestly it does not bother us. We can help him with English at home and during his break we plan to work through the grammar necessary for his grade level.

Unfortunately, at this time I cannot give a detailed description of life at school because we have been only been here a short time. What I can tell you is that the school year here is a little different from the US and Largo will be on his two month break in two weeks. He is pretty darn excited since he only started school seven weeks ago and now it is summer break. When he goes back to school in February I will give you a full update on life at his school, plus I will interview him about the similarities and difference between here and his school in Boston.

I do have a couple of stats and tidbits to report thus far:

I will be posting about the children and their school situations more on the blog as developments occur. I hope you have enjoyed learning about why we chose separate education paths for the AvaLar crew. At this point we are very happy with our decision and we will re-evaluate as time goes on. If at some point one of the situations is not working anymore then we will adjust it to meet their needs. I always say that their education path is something we take year by year as they change and grow.

I want to thank you for following us and sharing our story. We have seen in increase in traffic and GGG FB page LIKES since we moved here. Thank you.

Go out and have an adventure.

Have a great day.