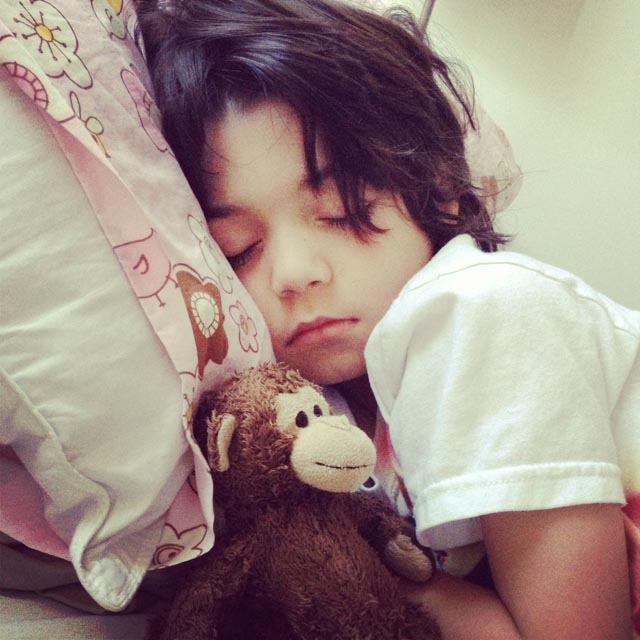 Hola friends. Are you envisioning someone cutting off our fingers and torturing us all night long? Well, this post is going to be very different from what you expect.

We have a kid that has some serious night terrors. S.E.R.I.O.U.S!!!!! Can I tell you how hard this is when you travel and you are sharing walls, floors and ceilings with other families?

Let me start by giving you a little history on this sleeping situation. Both of our kids have been raised exactly the same, but as most of you know kids have their own personalities and innate traits. Avalon was a textbook child with her sleeping. She nursed for a year and a half, slept through the night at 13 weeks, yadda, yadda, yadda. So when Largo came along we assumed we did something right with Avalon and we would repeat and rinse with Largo. WRONG! This little guy has been a poor sleeper from the beginning. We have done it all, read every book and we even had a meeting with THE FERBER!

Until a year ago Largo’s sleeping issues were only related to the fact that he would venture into our bedroom between 2-5 am several times a week. We decided years ago that this was not the worse thing that could happen and if it got him a good night sleep then we were ok with it. Unfortunately, a year ago this sleeping situation escalated to full-blown night terrors. Our pediatrician told us that he would outgrow them and not to be too worried because this was normal for night terrors.

While in India we started to realize that these terrors were approaching the one year anniversary (no need for celebration) and they were still going strong. It was at this point that we decided to see a specialist. When we returned to the US we met with a specialist at Mass General and she gave us some suggestions. Unfortunately none of them have worked. Her main suggestion was to let him scream in terror and work through it alone. Easy to say until you have heard one of the screams and what a child says when they are in a terror. It is horrifying.

Funny thing, our first month in Costa Rica was void of any night terrors. My first thought was that we were never going to be able to leave Costa Rica, at least not until Largo went to college (sarcastic undertone). We were so optimistic that the habit had finally been kicked that we almost planned an I’m sleeping through the night (FINALLY) party for our seven-year old. My mind drifted to how we would decorate for this party, maybe throw pillows, blankets and little desserts shaped like beds. Ok, let’s get back on topic, I love to digress. I am sure most of you are wondering what we did different in Costa Rica to create this change. The only thing we can think of is that we were in tight quarters and Largo slept in a bed with us every night. Of course, this was not a situation we could continue forever, or could we? Ha. Nonetheless, he is in his own bed now and they are back big time.

What have we learned about night terrors:

What have we done about the terrors:

How has this affected the family:

Today I reach out to my readers and ask if anyone else has experience with this? Do you have any suggestions for me? Also, this is an apology to anyone who has lived next to us for the past year. I assure you we are not torturing our child and this is just as difficult for us as it is for you.

There is a lot of travel on the horizon for us while we are in Costa Rica and a bunch of overnight trips. Any suggestions on how to handle this and how to avoid pissing off every one in the rooms next to us.

Hope everyone is having a fantastic Tuesday.