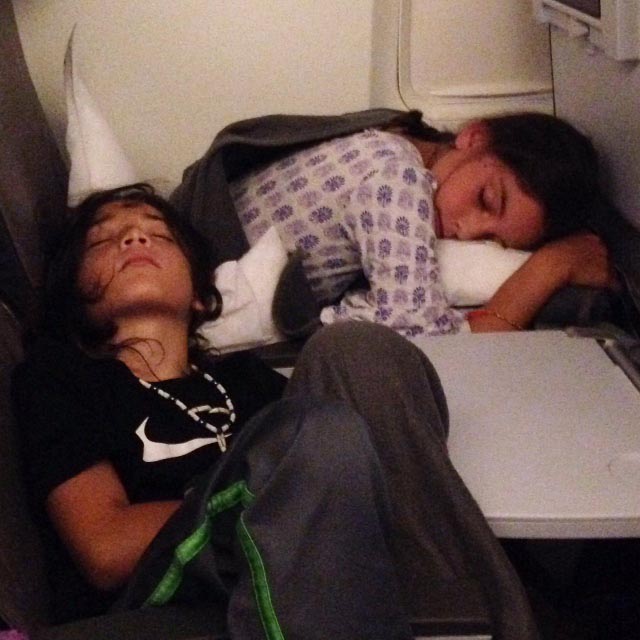 Bonjour, friends! Are you dying to hear about France? I know. I am ready to share, however, I want to go live with a couple of other posts from our time in the US first. I will leave you with this teaser… everyone is happy, thriving, at peace, and eating well here in France. Yes, eating is a big part of our life in France. We are affectionately referring to this year as our year of food. Ha!

If you have been following this blog for at least the last two years, you have probably seen a post or two about how travel has changed us, but this one is going to come from a different angle. It is easy for us to see  how travel changes kids and family while living outside the US. However, we have been unable to see how these changes affect them when they return to the US, until now. As most of you know, we just spent six weeks in the United States. It was truly a delight to see the kids navigate a land so familiar to them with a handful of new skills and a different approach to life.

Travel Changes Kids: Will and I noticed many changes in AvaLar, but our top five would be the following:

Adaptability: Their ability to adapt was often better than Will and I could have ever imagined or done ourselves. They were able to sleep in many different beds in varying environments with extreme comfort/discomfort levels. They never once complained about our accommodations. Sometimes they were in the feather beds at the Marriott and other times they were on a hard wood floor at a friend’s house. I think that, more often than not, we choose to keep our kids in their comfort zone way too much in the US. Kids can do hard things, they can sleep in uncomfortable beds, they will survive and even thrive with change. We also noticed that they were able to adapt to any sudden change in plans. This could mean cancelled plans, modified plans and late to get out of the gate plans. It is not always easy when you have your heart set on something and it changes at the last-minute. However, there is a lesson in having the ability to adapt to the change. The kids did great. In addition to all of the above, they were also taken way off their regular schedule. Just like any other family, we have our version of routine, with school, work, adventures, and social engagements nine months out of the year. Throughout the school year, we do our best to make sure they get a good night’s sleep, with plenty of those hours taking place before midnight. This summer was the summer of pushing the limits when it came to sleep and they did remarkably well. We have tried this before and it mostly flopped within a day or two. Many of our social engagements with friends and family in the US took place in the early evening and onward so we were grateful that we had finally come to a point where we could keep them out late if necessary.

Socialization: You have all heard me say that one of the greatest benefits to this travel lifestyle is the social aspect. AvaLar no longer socialize with only their own gender and age. These kiddos have friends of varying race, age, gender, religion, and much more. We see it each and every day in our travel life, but I wondered how that would translate once they were back in the US. Well, I am happy to report that they were able to continue on this path. They connected with online friends they had never met in person seamlessly, they hung out with friends from our old life who they had not seen in a year, they struck up conversation with random kids at the park, and the list goes on. However, what I particularly loved (and did not think this would happen when back in a familiar situation) was that they still played with each other. There were numerous occasion where we were with one of Avalon’s (or Largo’s) friends and neither blinked an eye about having the other along to play. I see this all the time outside the US with these two, but I really did not think it would happen once they crawled back into old habits. Also, they were able to have conversations with adults. Our life outside the US is mostly families socializing together, as a result, the kids are not used to kids in one room and adults in another. I was wondering how this would play out while being back. In some cases the kids disappeared to the kids rooms and in others they all hung with the adults and chatted. It really depended on the situation and the relationships within the families. Overall I was impressed with their social ability in yet another environment.

Non-materialism: When we left the US two years ago, they were allowed three large ziplock bags of toys. Both of the kids filled the bags so full they could barely close. Whatever they had left over for toys was put in their bedrooms at my moms summer place. It was an unbelievably difficult process. Fast forward two years and they are completely changed. Their rooms at the cottage were so full of stuff that we could barely create a path to get to their bed. They knew we planned to have another lawn sale and miraculously, these two went gang busting into their rooms to purge. Largo definitely had an easier time with it. He told me after that it felt so good to have very little in his room. Avalon did not have a hard time purging, but she struggled with the process of cleaning and deciding more than Largo. It was overwhelming for her and if you saw her room, you would know why. I cannot even begin to put into words how much of a proud mommy moment this was for me. Once you cross over to valuing memories and adventures over stuff your life becomes so different. I am happy to see that they are making progress with this notion at such a young age. And when I gave them their three ziplock bags to pack up for France I was surprised. Largo filled one and a half and wanted to bring his American Boy pal to replace the other. Avalon brought half of a bag, two American girl dolls, some clothing for them and that was it. These are not the same two kids we left the US with two years ago and I say that with a great big smile on my face.

Self-assessment:  Both kids are friendly and love to socialize, however they need time to recharge. I must admit I was worried that our time in the US would be so busy that there would be no time for them to recharge. But, they have apparently learned the fine art of self-assessing and taking time when they feel they need it. Sometimes we were lucky enough to be in the car when they needed to recharge, but other times they were at a party or with a group. It was a pleasure to see them sneak away to read or have them tell us they were ready for bed. I still struggle with being able to know when enough is enough so for me this was a great accomplishment on their behalf. We have never been of the parenting mindset that they “must” socialize. If we are in a social situation they are not interested in or if they need time alone we allow them to self-assess and make the decision right for them. Our worry is never on what other people will think of our kids, it is always on what they feel is best for them. At ages 12 and 8, I can confidently say that they know when they need time alone, time to recharge, or time away from a group.

Acceptance: This was my favorite observation from our time in the US. I heard a lot of racist comments while in my homeland, more than I have ever heard before, EVER! This saddened me greatly and there is a post in the making. However, I was impressed with AvaLar and their objection to this type of behavior. They never once changed their views on acceptance because people around them did not have the same views. They asked a lot of questions and clearly, we had some big “teaching” moments, but overall they thought that everyone should be treated equally and to think otherwise would just be unfair. I love these little buggers.

Travel changes you! We need more children traveling because they are our future! They will go out and see the world and then bring it home to make a difference.